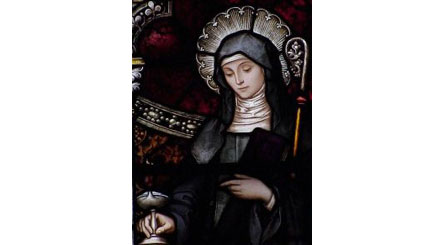 St. Brigid of Ireland (453-524) is one of the patrons of Ireland, along with St. Patrick and St. Columba. She was an Irish Christian nun, abbess, and founder of several monasteries. She is one of the early female leaders in our Church known for her charity to the poor. Today, she is best known through her association with Ireland and the St. Brigid’s Cross, which is named after her. The St. Brigid’s Cross is a cross made from weaving rushes or straw. They were often made on St. Brigid’s feast day and then placed in the thatch roofs of the countryside for protection. Today, you can still find St. Brigid’s Crosses, but often on a wall as a reminder of faith. St. Brigid’s feast day (February 1), celebrated as Imbolc in Gaelic Ireland, coincided with the pagan feast of the beginning of spring. St. Brigid is often confused with the pagan goddess of the same name and shares many attributes with her. In modern times, Brigid has been revered as a feminist figure because of the leadership positions she held in a patriarchal time, even being described as a bishop by her contemporaries.

“I would like the angels of Heaven to be among us.

I would like the three Marys of illustrious renown to be with us.

I would like the friends of Heaven to be gathered around us from all parts.

I would like myself to be a rent payer to the Lord; that should I suffer distress, that he would bestow a good blessing upon me.

I would like a great lake of beer for the King of Kings.

I would like to be watching Heaven’s family drinking it through all eternity.” — St. Brigid’s Prayer

Copyright © 2022 Young Adult Ministry in a Box. All Rights Reserved.